A pair of Bucks New University graduates got their creative minds in gear with the idea for Audi’s ‘Synchronised Swim’ advert.

The advert features two Audi cars carrying out synchronised swimming in a pool against the backdrop of a new cover version of the Genesis track Follow You Follow Me, by Faultline featuring Rina Mushonga, to publicise Audi’s small car range.

The ad has already made a splash and proved popular and is the brainchild of alumnae Gina Ramsden and Freya Harrison. It comes after the pair also worked on a popular parody costume drama ad, called ‘Pride and Breadjudice’, for Warburtons.

The film, shot by Johnny Hardstaff, opens in a deserted changing room before panning out to an empty swimming pool. The pool, designed and built in Ukraine especially for the shoot, features an A1 and A7 Audi performing a synchronised routine.

Gina and Freya are Creatives for agency Bartle Bogle Hegarty (BBH) and they said: “We're really happy with how the Warburtons advert and this Audi ad have gone down with the public and within the industry.

“After Warburtons it was great to get our teeth in to something completely different. This Audi ad was all about simplicity as we only had two bits of metal to play, with making it a total contrast and different challenge to our Warburtons film. We're really excited about what we can do next and another chance at getting to work with the best people in the industry.”

The pair graduated in 2015 and have been a creative team since meeting at Leeds College of Art, and then followed each other to Bucks for a BA (Hons) Creative Advertising degree.

The duo’s career started with a placement at Mother London, a creative agency network, straight after their End of Year Show. After three months they moved on to advertising giant Saatchi & Saatchi. In January 2016 Gina and Freya were hired at creative agency WCRS where they came up with the idea and wrote the script for the Warburtons ad, before they moved to BBH in July 2018. 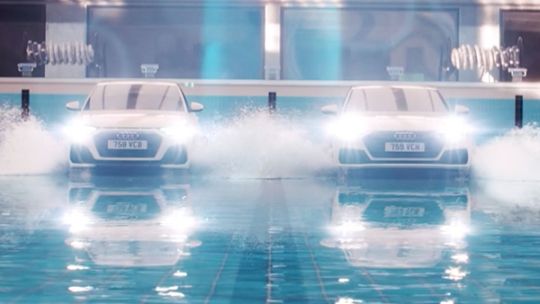 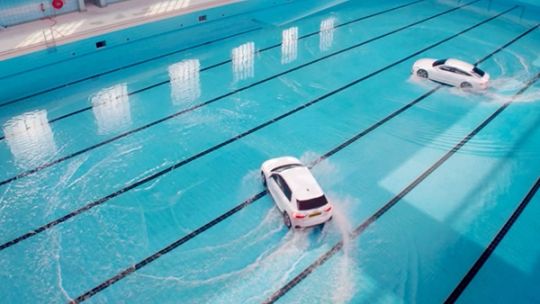 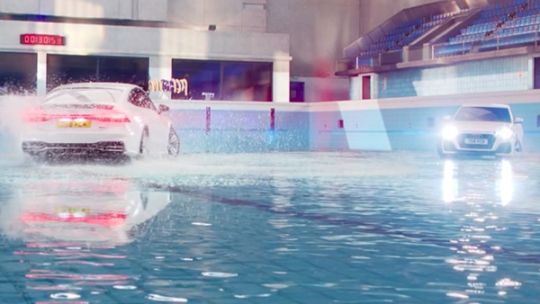 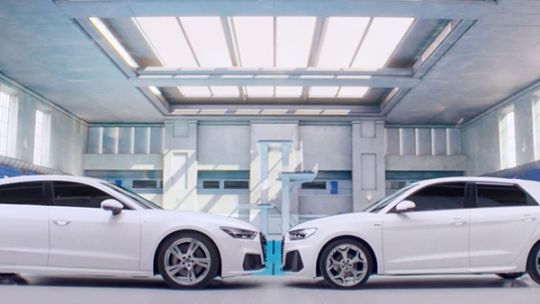 The brief for BBH was to show Audi's smaller car range had everything the more premium cars had and so Gina said the pair set to work on how it could show off the cars in the most impressive way.

“We wanted to show that everything the big car could do was matched perfectly by the small car, hence the synchronised swimming idea," added Gina and Freya.

“We wanted to tell the story and keep it simple while avoiding becoming a clichéd car ad, and we also wanted to keep the Audi tone, wit and charm, ensuring it had a purpose for putting it in what would be considered a cool location.

“Once we had the idea we spent weeks crafting the script to the best it could be. Then we were involved in the whole process, from choosing the director, working with him to bring it to life, shooting the ad and then carrying out all the post production.

“We're so pleased with how it's turned out. We had an amazing team working on it with us, from our team here at BBH to the brilliant director Jonny Hardstaff, his production crew and all the talented people at the Mill, Final Cut and 750 mph. Everyone pulled together to craft the script we wrote to the best it could be. It's been really well received which is always such a great feeling and makes all the hard work worth it.”

The Warburton ad told the romantic story behind Warburtons and starred comedian Peter Kay portraying a dashing seed salesman, Thomas Warburton, who wins the love of a baking-obsessed noblewoman called Ellen. The couple bond over the creation of a seeded batch loaf, including a hilarious homage to the famous film Ghost (1990) potter’s wheel scene.

Looking ahead, Gina and Freya added: “We're happy with how our careers are progressing. We don't let ourselves get too comfortable or complacent at an agency as when that starts to happen we know it's time to move.

“Making the move from WCRS to BBH was really good for us as, providing new impetus and dropping us in to a super competitive and talented environment which makes us work even harder and push ourselves to come up with the best work we can.”

On their education at Bucks, the ambitious pair said: “Bucks gave us the first experience of live briefs in industry and opened up lots of contacts which were invaluable.”

Senior Lecturer Julie Wright said: "It is wonderful to see Gina and Freya keep going from one amazing success to another. Bucks is very proud of the pair of them - keep at it!"